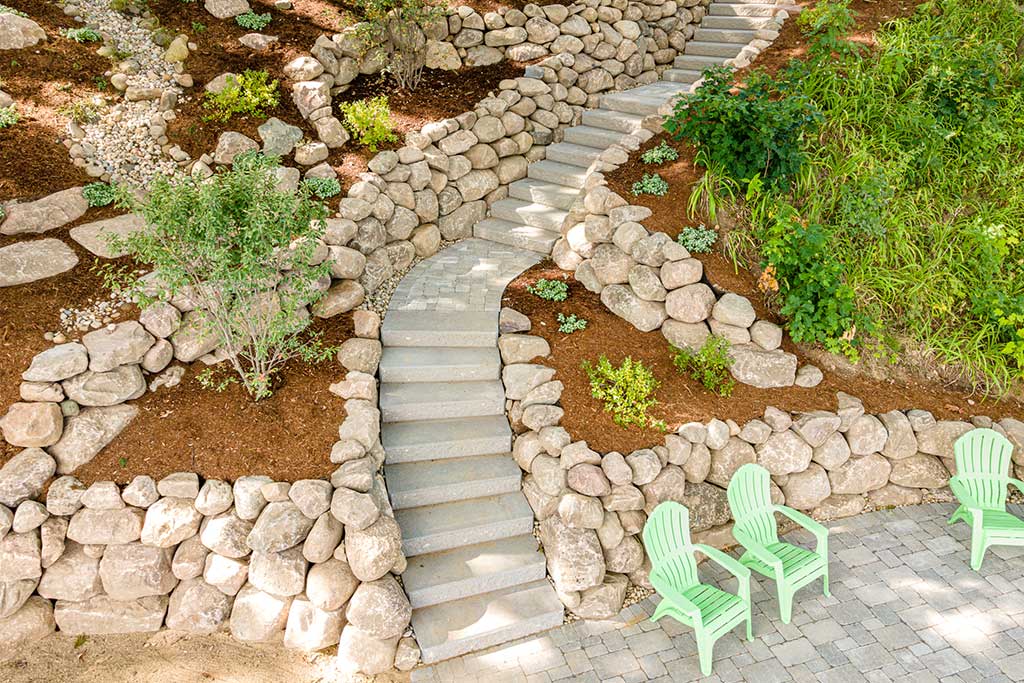 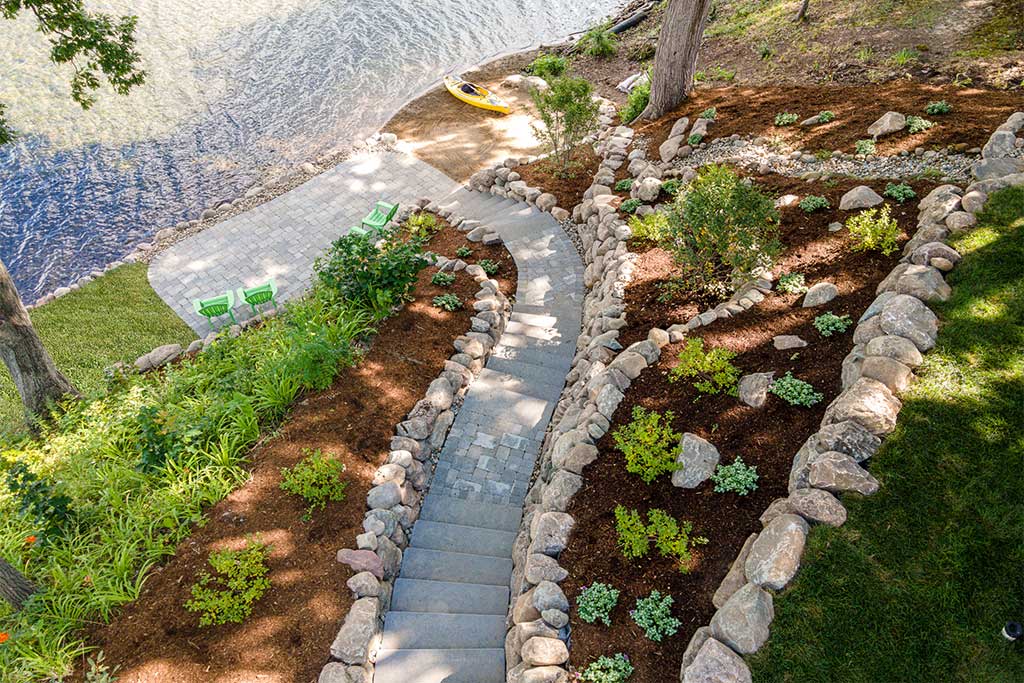 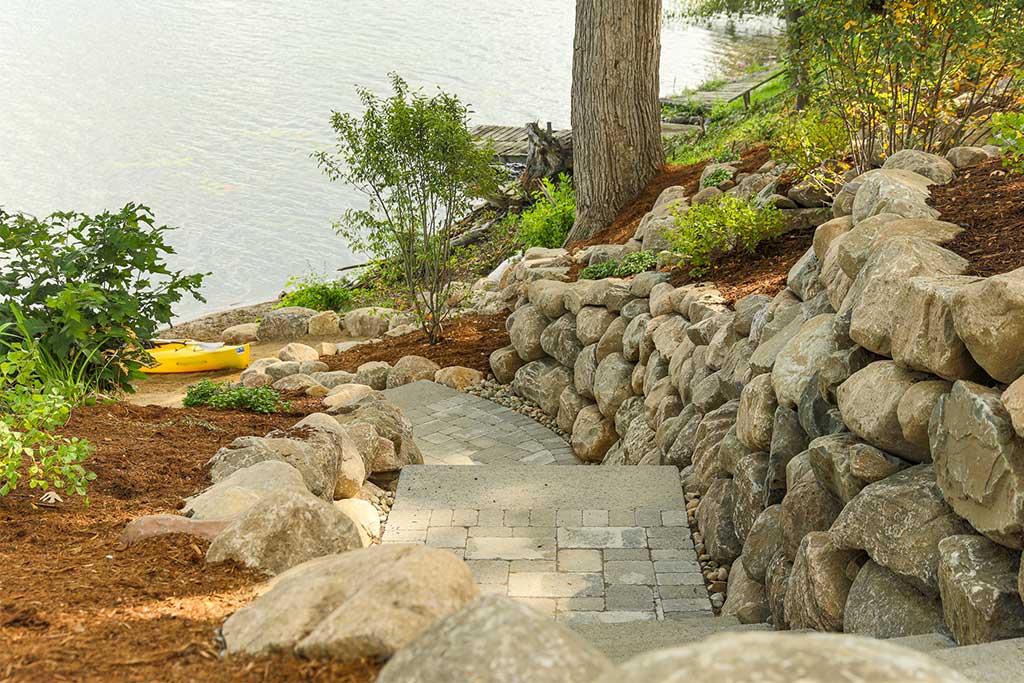 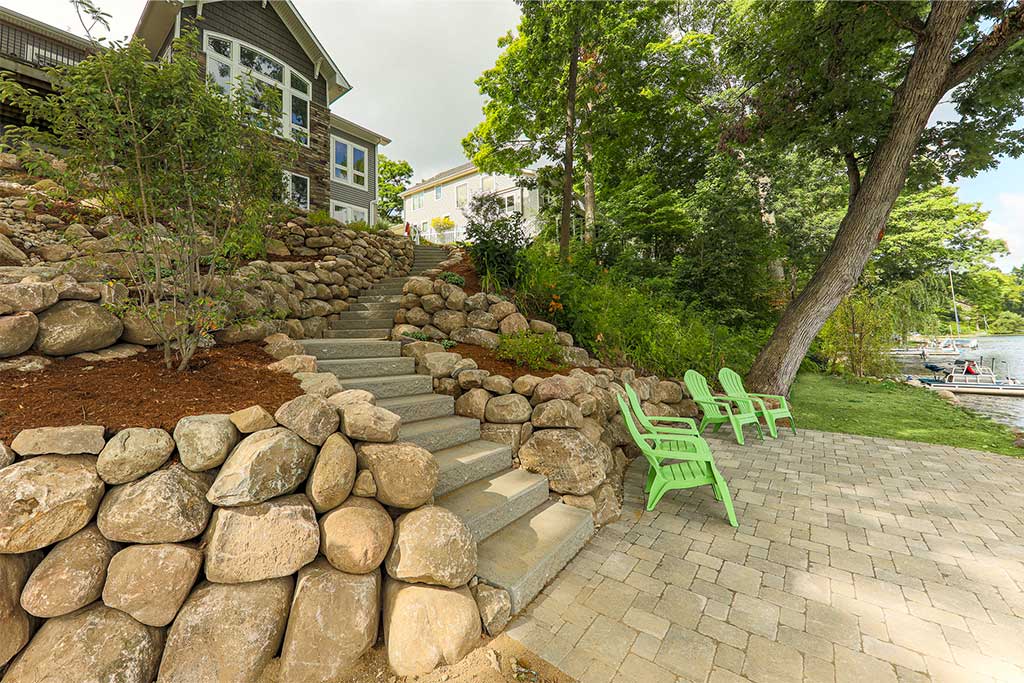 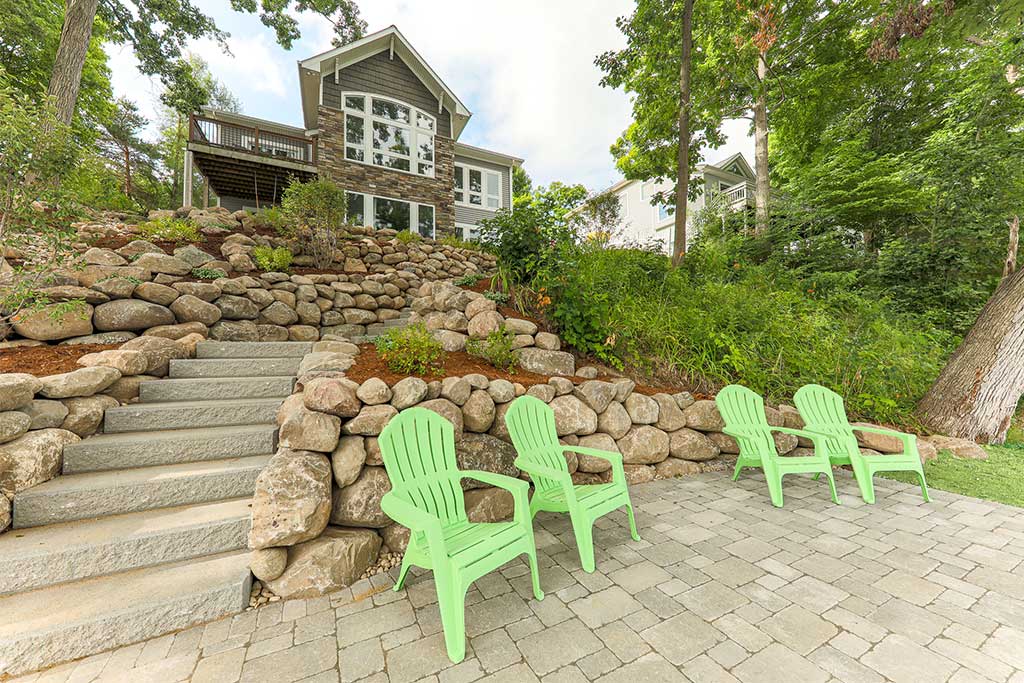 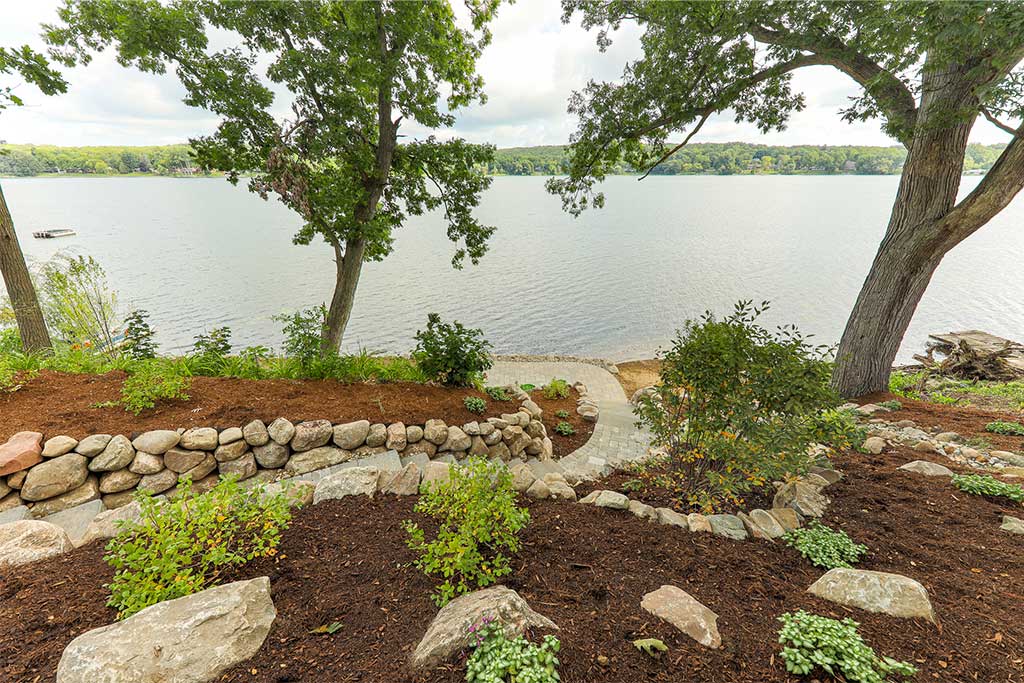 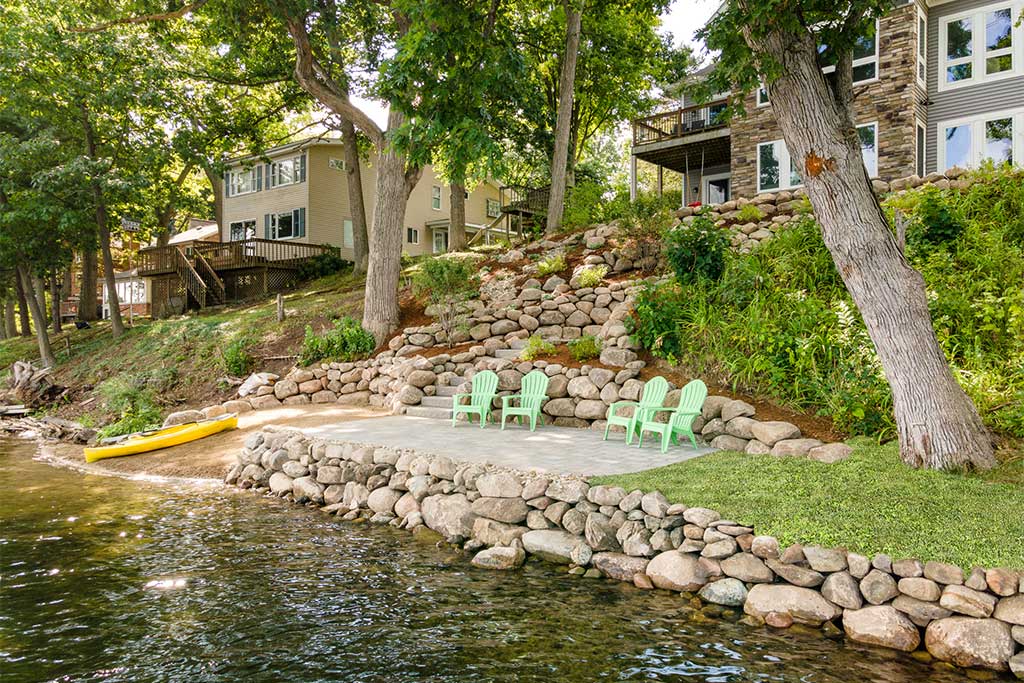 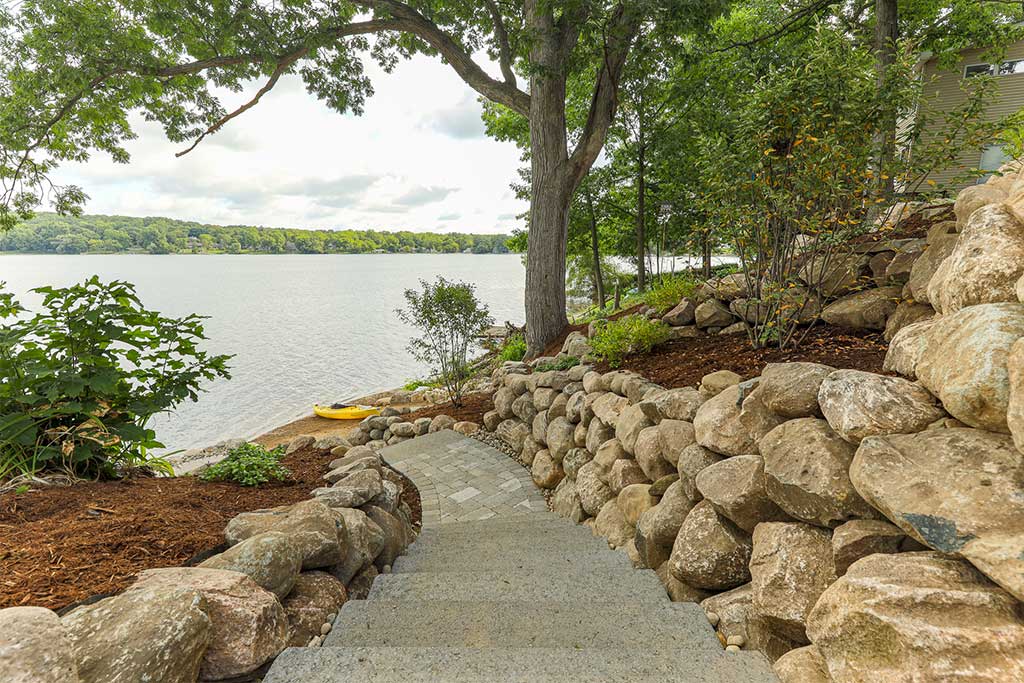 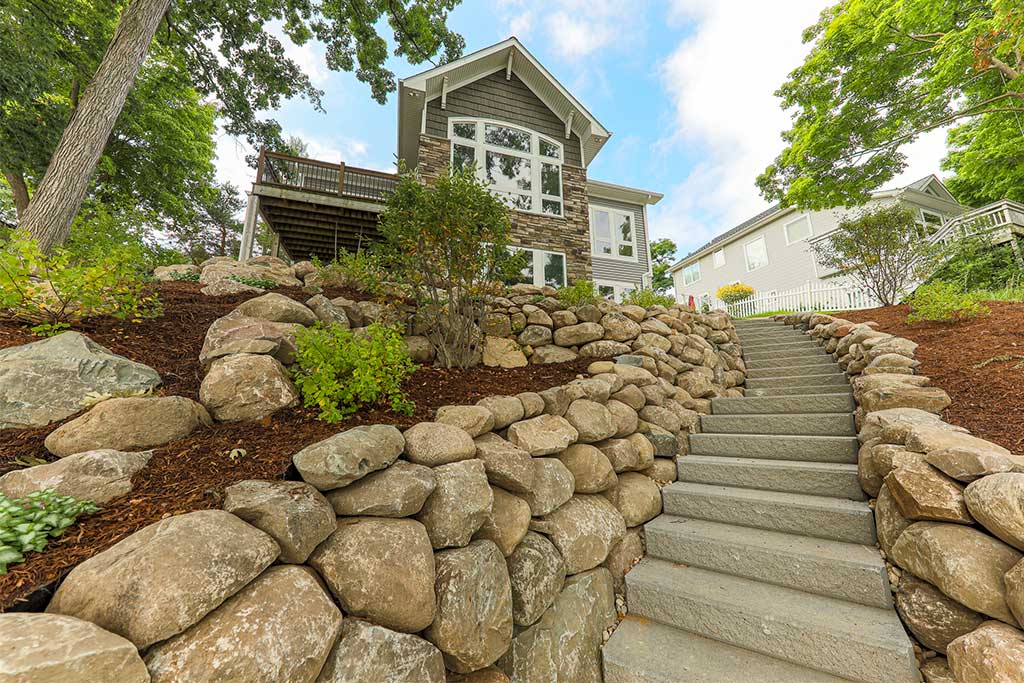 At this beautiful lakeside home, the owners were struggling to use their shoreline due to the steep incline to and from the water, which before had only a stairway straight down to the bottom with no landing at all. They knew they weren’t getting the most out of their property, but weren’t sure what was possible. The homeowners gave designer Craig Fisher a blank slate to work with and he presented them with a vision that has made them the envy of all their neighbors on the lake. Now instead of straight, steep, unusable stairs, they have a beautiful paver stone and brick switch-back stairway with landings that present a natural look that is as functional as it is gorgeous. Plants at each level of the paver steps and landings work to soften the hard lines of the stone and contribute to the natural look of the space. At the top of the stairs, the design was constructed to incorporate an existing concrete walkway for a seamless transition all the way down to the beach. In addition to the stone stairway and paver landings, the homeowners also now have a paver patio for entertaining right at the water’s edge, a place for children to play, and an area to launch paddleboards and kayaks right from their property.

What Our Client Said
"Prior to contacting Michigan Landscape Professionals we had spoken with numerous other companies. We have a tricky site which in my mind meant we had the opportunity to do something really spectacular. As an Architectural designer myself, I have very high standards and am okay with thinking outside the box. After my initial meeting with Craig I finally felt like I had found someone who had a true eye for design. He was able to see the potential in the site and was willing to work with the landscape and not against it. His initial concept was so different than any others that we had seen and it was spectacular! The turn around for quotes and the breakdown of line items was impressive. The actual construction was much the same. Hugo and his crew were a power house! They worked like crazy and were absolutely meticulous with every detail. There were no shortcuts and they went the extra mile to make sure everything was done right. I was speechless at the end of the project. I am typically very good at visualizing design concepts considering that is my profession, but I had no idea how beautiful the final product was going to be. I truly could not have been more pleased with the entire experience. I would recommend Michigan Landscape Professionals to anyone who is looking for a one of a kind, impeccable product with a professional and timely process."
Kate R.

See Other Projects In:
Brighton, MI Landscape Design & Installation Services
For More Information: 810-844-5200
Get in Touch
Quick Links
Our Services
Contact Us 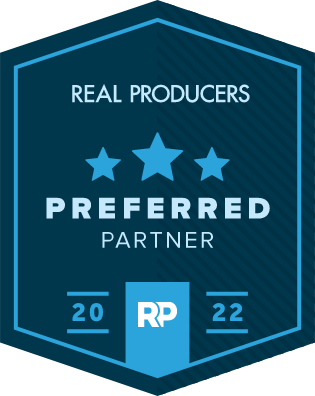