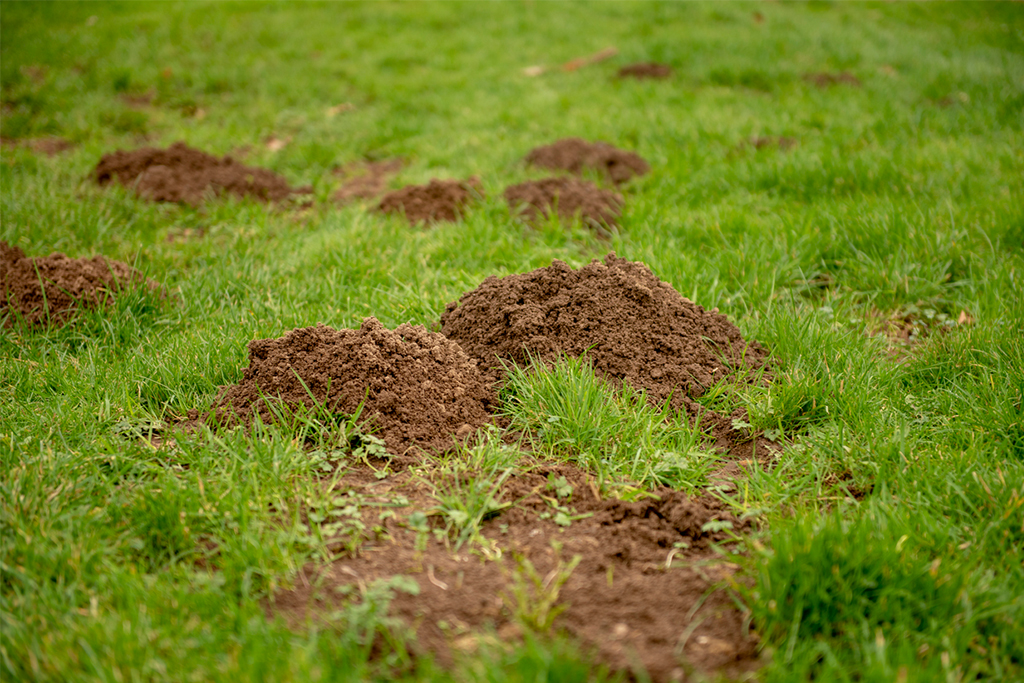 Moles can cause extensive damage to a lawn if left unchecked. Their tell-tale runs create furrows in the turf and can then sink as they collapse, creating low areas and hazards. It is a common misconception that treating your lawn for grubs will also control moles. While moles do enjoy a tasty grub, their main diet consists of other insects as well such as earthworms and other invertebrates. The mole tunnel or ‘run’ functions as a worm/insect trap and moles will sense when a worm falls into the tunnel. We can take advantage of this by injecting a poison bait worm that mimics their natural diet directly into the mole run. The mole will sense the bait worm and run to collect it. When the mole bites into the worm, the poison is activated. While there is no way to prevent new moles from entering your property from an outside area, our mole control program can reduce their number and begin to eliminate moles on your property.

What Our Clients Say
"Prior to contacting Michigan Landscape Professionals we had spoken with numerous other companies. We have a tricky site which in my mind meant we had the opportunity to do something really spectacular. As an Architectural designer myself, I have very high standards and am okay with thinking outside the box. After my initial meeting with Craig I finally felt like I had found someone who had a true eye for design. He was able to see the potential in the site and was willing to work with the landscape and not against it. His initial concept was so different than any others that we had seen and it was spectacular! The turn around for quotes and the breakdown of line items was impressive. The actual construction was much the same. Hugo and his crew were a power house! They worked like crazy and were absolutely meticulous with every detail. There were no shortcuts and they went the extra mile to make sure everything was done right. I was speechless at the end of the project. I am typically very good at visualizing design concepts considering that is my profession, but I had no idea how beautiful the final product was going to be. I truly could not have been more pleased with the entire experience. I would recommend Michigan Landscape Professionals to anyone who is looking for a one of a kind, impeccable product with a professional and timely process."
Kate R.

"We had multiple companies quote our job and decided on MLP...The crew were excellent and worked very hard to get our project completed in a timely manner. It was a big project so certain things had to be decided on the fly...They went above and beyond to ensure that our vision was realized.."
Andy M.

"I recently had some new landscaping designed and implemented by [Michigan Landscape Professionals]...[Rick's] design hit all the points I stressed in our initial walk through. The work began ahead of schedule and was executed magnificently by friendly skillful workers."
Benjamin E.

Previous Next
Our Advantages:

Get in Touch
Quick Links
Our Services
Contact Us